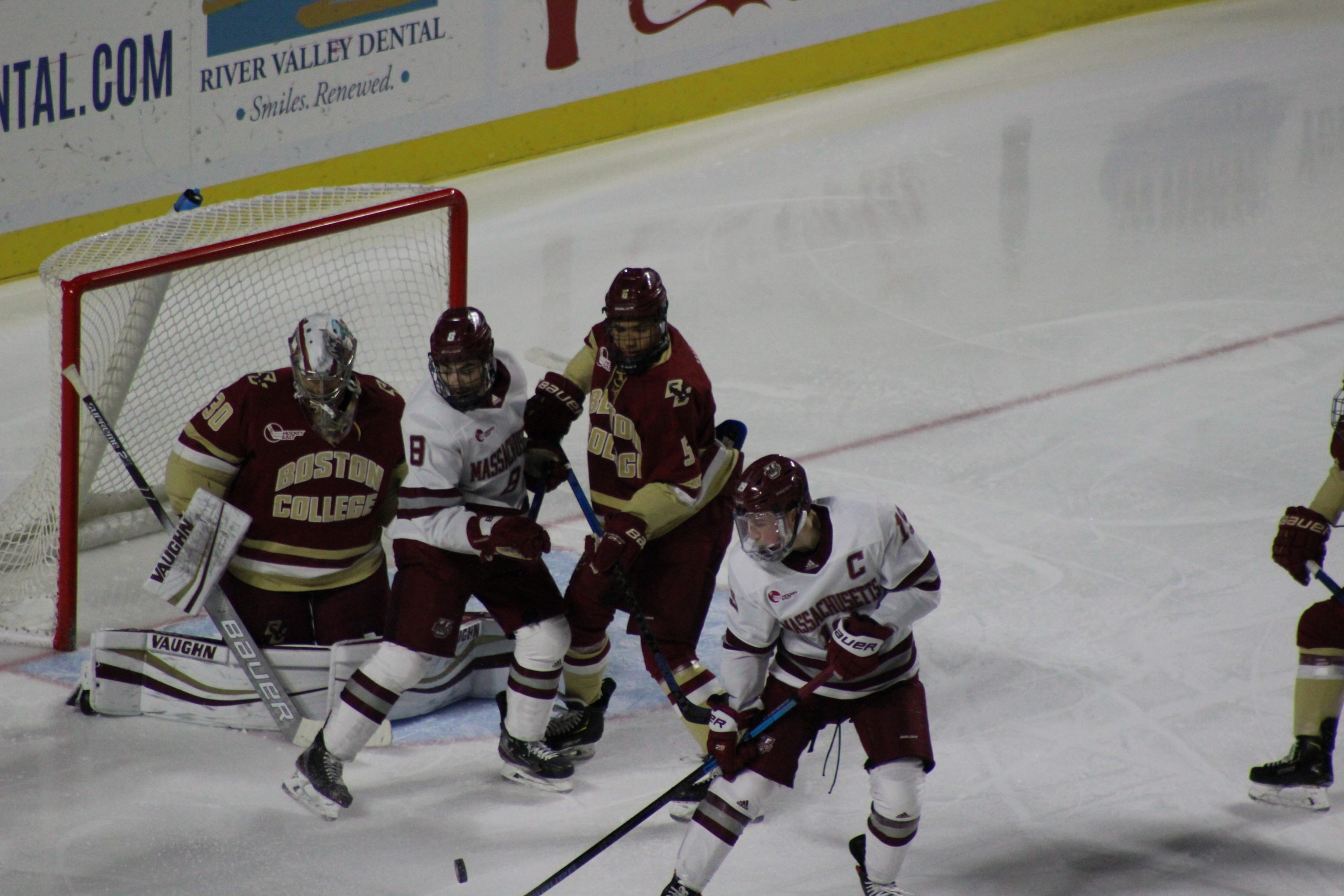 Amherst, MA – Two of the nation’s top ranked teams faced off in front of 7,336 inside a raucous Mullins Center on the outskirts of the University of Massachusetts campus. Not only was it #7 Massachusetts hosting #5 Boston College, but it was first place taking on second place in Hockey East action. BC Freshman goalie Spencer Knight (30 saves) was the biggest factor in the Eagles leap-frogging the Minutemen into first place with roughly a month to go in conference play. Knight’s shutout of the Minutemen was his fifth on the season, and third on the road. Three goals in the second period by BC’s Alex Newhook, Logan Hutsko, and Graham McPhee combined with he performance of Knight was too much for the Minutemen to overcome.

The Minutemen had a power play just 1:23 into he game when BC’s Marshall Warren was called for Tripping. Massachusetts had solid pressure in the Eagles zone but Knight stood tall against both Minutemen scoring chances.

A poor clearing effort by Minutemen defenseman Matthew Kessel led to Aapeli Rasanen firing two shots on goalie Matt Murray, who was equally up to the challenge in the first period.

The Eagles had their first man advantage at 9:19 when Philip Lagunov was sent off for Tripping. BC’s Hutsko clanged the post on one shot while Julius Mattila was snuffed at the far post by Murray on another bid.

UMass outshot the Eagles 9-8 in the first period.

The Eagles struck just 1:09 into the middle frame when Murray made a save on a Ben Finkelstein shot but lost sight of the puck as it bounced over him and the freshman Newhook batted the puck into the Minutemen net for the 1-0 lead. The goal was the 10th of the season for the Newfoundland native.

The two teams traded penalties when UMass defenseman Marc DelGaizo was whistled for Tripping at 3:14 while BC forward Marc McLaughlin was called for Roughing at 6:39.

Hutsko led the Eagles up ice in a two on one with David Cotton, while UMass defenseman Jake McLaughlin defended. Hutsko kept the puck, while McLaughlin covered Cotton, and the junior backhanded the puck past Murray for the 2-0 BC lead. Hutsko’s 15th goal of the season leads the Eagles.

The Minutemen pushed back with 10 shots on goal in the second period but with 1:34 left in the period McPhee’s wrist shot past Murray for a 3-0 lead seemed to break UMass. Finkelstein assisted on the McPhee goal giving him two assists on the night.

The third period opened with four on four action as UMass forward George Mika was called for Interference when he crashed into Knight in the goalies’ crease while BC defenseman Warren was sent off for Cross-Checking Mika while he was on Knight at 3:02. The action in the period was slowed due to five more penalties being assessed. Two to the Eagles and three to the Minutemen.

Each team had 11 shots on goal in the third period, with UMass outshooting the Eagles 30-27 on the evening. BC had the slight 34-31 edge in face-offs won for the game. Both teams have 20 points in conference play but BC holds the tie-breaker due to their going 2-1 against the Minutemen this year.

“I think, from my perspective, the game was all about Spencer Knight who was just outstanding in goal,” said BC coach Jerry York. “The ability of our penalty kill to go six for six on the PK, because they (UMass) have a good power play. We seen it three games now within three weeks. Spencer’s a part of that, but I thought our team did an excellent job killing penalties.”

“I felt like we were loose tonight,” said Massachusetts coach Greg Carvel. “Couple of spots BC took advantage, they’ve got the ability when they get chances to score they finish. That to me was a big difference in the game. Their ability to finish on their chances. I thought their goaltender did a nice job, he was in control all night. We tried to create some chaos in front of him, we did at times but he did a nice job.”

“On two of the goals we got beat up the ice, beat out of the corner, just some checking details that we too loose. Did a good job on the penalty kill, kept them off the board. We didn’t score but our power play looked like it had some life, moving the puck around, we got the puck to the net a bit. So that’s a step in the right direction,” added Carvel of his team’s special teams play. The Minutemen have struggled on the power play this year after being one of the top teams last season.

Boston College will next play on Monday night at 8:00 pm when they take on Boston University in the 68th Beanpot Tournament at TD Garden. Massachusetts is off until next Friday when they host Providence College at 7:00 pm. The two play on Saturday at Providence’s Schneider Arena at 7:00 pm as well.