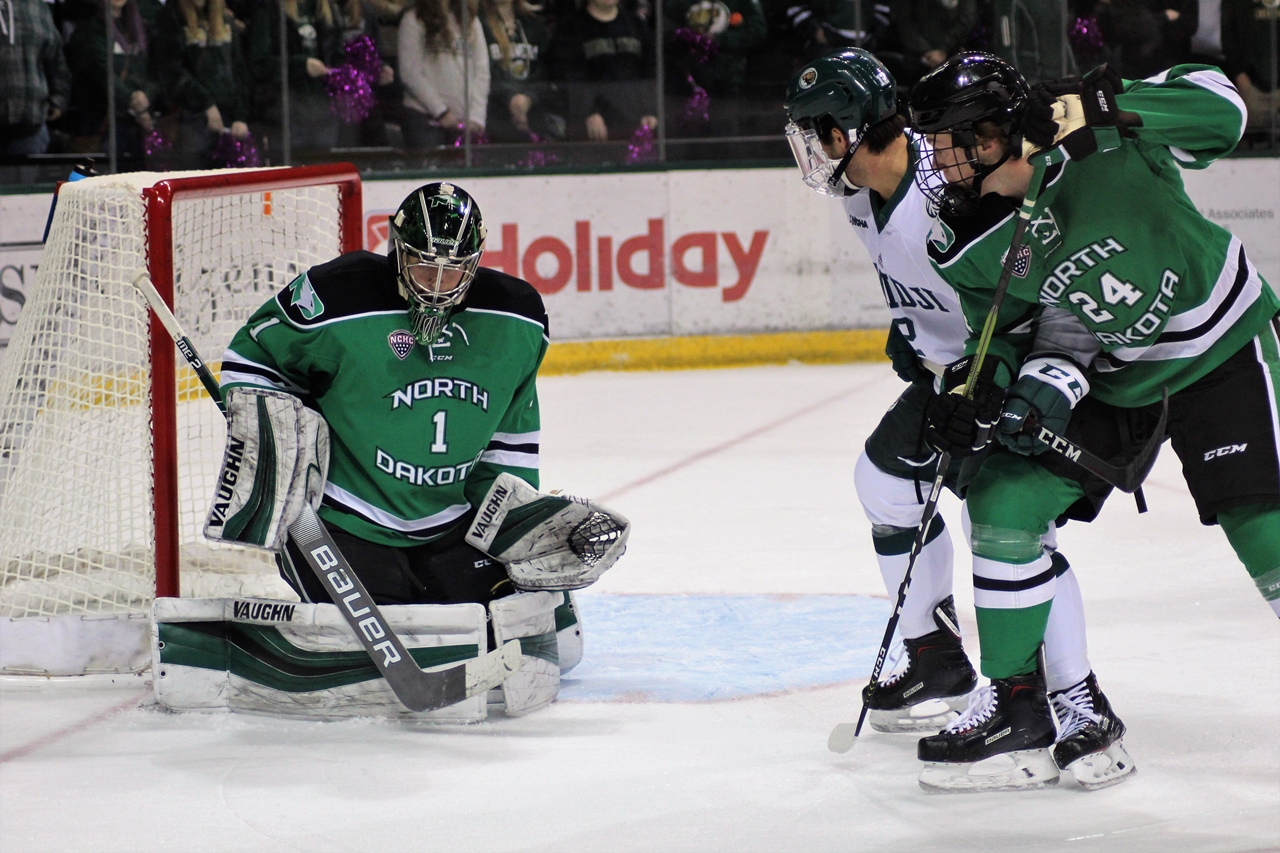 Coming into Saturday night, UND had something to prove. They had plenty of chances against Bemidji State on Friday night but could not come up with a win to open up the season. Now coming home in front of a packed Ralph Engelstad Arena, the Fighting Hawks wanted to get out to a good start and build on that. They got the good start. Nashville Predators’ prospect Grant Mismash converted an early marker to give UND a 1-0 lead.

That lead lasted most of the night, and UND was unable to build upon it with insurance markers. That inability to add insurance tallies came back to bite the Fighting Hawks. In the third period, 15:46 in, Charlie Combs of the Beavers took a feed from Brendan Harris and wired a perfect shot past three players and rookie netminder Adam Scheel to tie things up. Neither team would find the twine in overtime so the game ended as a 1-1 draw. UND finishes the weekend 0-1-1 to open up the season. The Fighting Hawks take on Minnesota State Mankato next week for their first full non-conference home series this season. Below are a few thoughts on why UND fans should yes, not be happy about the result, but remain encouraged for the season ahead.

It’s Only One Week

I know that slogan gets stale real fast around here. Especially with UND just barely missing the tournament because they let one or two more games get away then they should have during the regular season. That being said, it was the season opener. UND has a large freshman class all vying for time. Adam Scheel looked good in net last night making timely saves and even distributing the puck quite well to key some attacks. Having a strong Scheel to backup Peter Thome can only help this team stay fresh in the long run.

There Is Now Tape

Yes UND had a lot of chances against Manitoba. Tape in this sense is tape playing games that count. The Fighting Hawks now can see how their special teams set up and diagnose issues to get more chances on the power play to find the back of the net.

Bemidji State is legendary for their ability to block shots. Last night alone they blocked 15 of UND’s 50 attempts. Now that UND has seen arguably the most defensive-minded team they will play all year, they will be able to take some ideas from this series and apply them forward. Other teams the Fighting Hawks play will have more forward skill, but not many teams left on UND’s schedule sell out on defense as much as Bemidji State does nightly. Should UND play Bemidji State or a similarly situated defensive team from say, Atlantic Hockey, in the NCAA Tournament, they now have film on what gameplan can work against a defensive team.

Yes, themes from the first two weekends have emerged similar to how last year ended. Lack of insurance markers, ithe nability to hold leads and lack of depth scoring are some of those themes. That being said, UND has played 60 minutes of hockey at home and generated some good looks last night. Would you like some more to go in? Of course, anyone following this team would.

That being said, early on in the year you want results to be there, but in a non-conference game against a decent defensive side, you learn what it will take to win some big games later on. In the NCAA Tournament, teams sell out to block shots especially when other teams are more skilled. That is how Air Force was able to upset St. Cloud State, great goaltending, quick counters, and superb defense. They nearly upset the 2018 National Champions, Minnesota Duluth,in the regional final, using a similar setup to what Bemidji State uses. Point being, yes two wins and lots of goals are preferred always by everyone, but absent that you like to see this team’s ability to generate chances, get some timely goaltending, and control faceoffs.

Goals will come for this team, changes will be made, and I still believe this team will return to the NCAA Tournament this year. Let’s see what happens in the next few weeks for UND before jumping ahead and making bold bad predictions.

*Please welcome Oliver Francis to our team, he comes to us from Seamore Sports.

You can find him at @SeamoreSports.