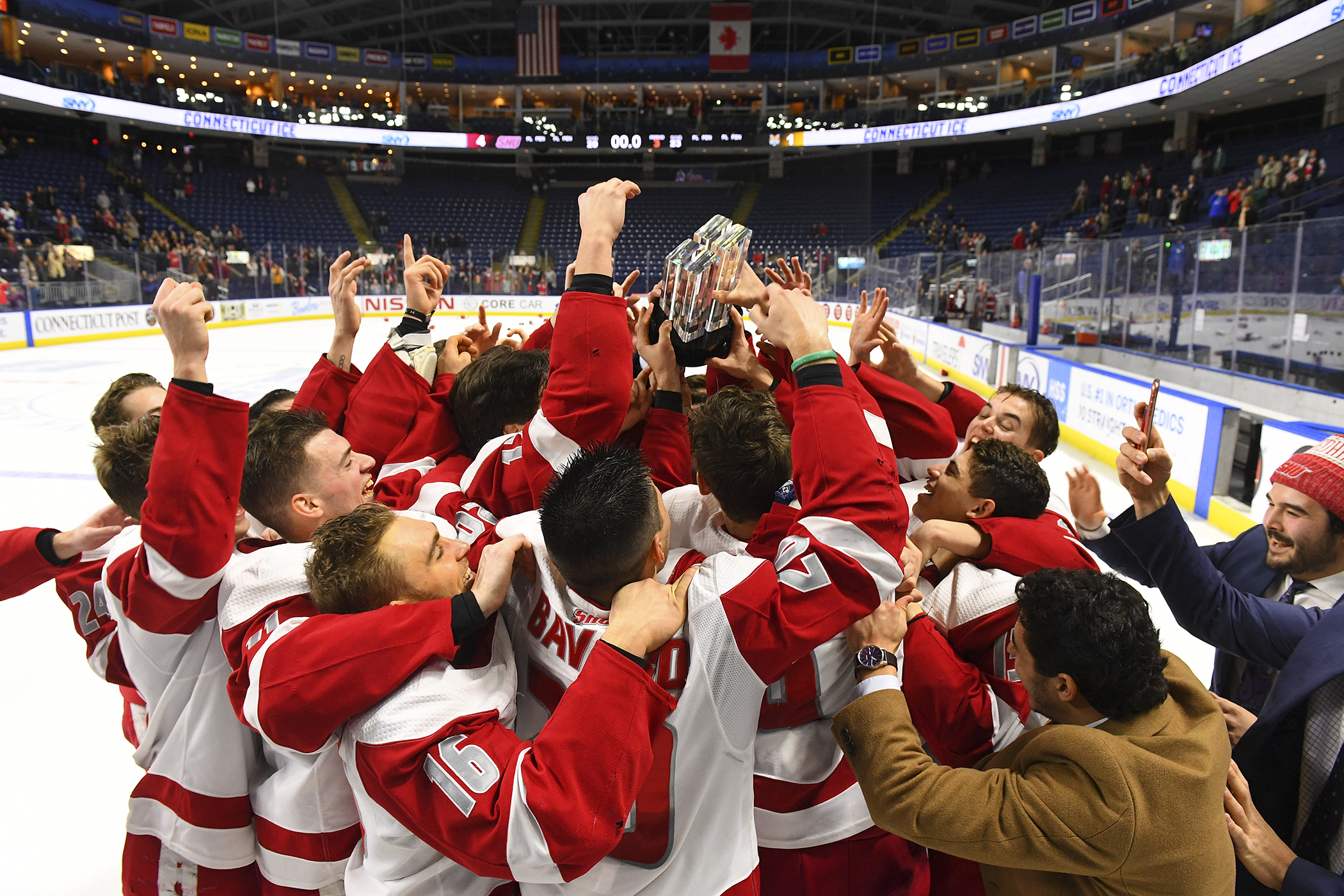 In 2020, Connecticuts’s four Men’s Division I hockey programs got together for a Beanpot-style tournament intended to develop and promote the great hockey tradition in the Nutmeg state. Sacred Heart claimed the first edition of the tournament, but due to the effects of the pandemic, the planned 2021 edition did not happen. Two years after its inception, the CT Ice Tournament is returning to the Webster Bank Arena in Bridgeport. Let’s preview the matchups.

Both these teams are riding ups in up-and-down seasons heading to Bridgeport. UConn is back over .500 with two straight wins, an overtime win against New Hampshire, and a regulation win over #19 Merrimack. Sophomore forward Ryan Tverberg is tied for 10th among Hockey East goal scorers and Jachym Kondelik is 14th in points per game. UConn has proven they can win against top-level programs this season as well with wins against Northeastern, UMass Lowell, and Boston College.

Union College transfer Darion Hanson has taken the starting goaltending job and performed admirably. He’s 4th among HEA goalies in total saves and has six 30 or more save performances this season.

Yale is riding a three-game point streak in ECAC play with a tie and shootout win at Colgate, a regulation win over RPI, and an overtime win at Union. Keith Allain’s unit struggled mightily to start the season and sits second-last in the ECAC, just ahead of Dartmouth. Still, recent success has increased hopes for Old Eli. Sophomore Ian Carpentier has five goals, two assists, and seven points in the last three games and aims to continue that hot streak. His punch has been needed on a team that badly lacks scoring Nik Allain is the only Bulldog with 10 points this season. The Bulldogs are 5th last in the nation in goals per game.

In net, Yale has rotated between three goalies. Nathan Reid, Connor Hopkins, and Luke Pearson have all taken turns in net for the Bulldogs. Pearson’s numbers have been the best (.923 save percentage), but Reid has gotten the most work. Since he posted 33 saves in the last win against Union, I’d guess that Reid will take the net for the Bulldogs this weekend.

UConn boasts a greater depth of offensive talent and a more proven track record in season. Yale has lifted their play the last few games, but UConn is a better total package team than the Bulldogs.

The Pioneer team that won in 2020 was built for that season with experienced seniors and graduate transfers. Perhaps more than any other program in the nation, the pandemic stunted Sacred Heart’s chances to build on a brilliant regular season and take a deep playoff run into the national tournament. The team that takes the ice two years later looks little like the offensively smooth and entertaining team that took the ice in the before times. SHU is in the bottom third of team scoring in the nation and right about the middle of the pack in goals allowed. Unlike the other teams this weekend, Sacred Heart is riding a losing skid; two losses to American International College to be exact.

Austin Magera and Neil Shea are the top scorers on the Pioneers unit this season and Magera is scoring at a point-per-game pace (16 points in 16 games). Former Bobcat Logan Britt is the team’s top-scoring defenseman and provides a nifty passing touch that will help considerably.

In net, Sacred Heart has rotated between three goalies. Justin Robbins, Luke Lush, and Josh Benson have all seen the net. Benson was the netminder in the 2020 edition of this tournament and posted a 22 save performance in the win over QU for the title. But he’s not seen as much success as Lush or Robbins. I’d guess they’ll play Robbins, who’s gotten the most work this season, but Lush has posted the best numbers in the least amount of work.

Quinnipiac enters the weekend as the prohibitive favorite and a serious National Championship contender. The Bobcats boast the nation’s best scoring defense, allowing only one goal per game this season, and recorded eleven shutouts, the most in the country. Both goaltenders, Yaniv Perets and Dylan St. Cyr are ranked in the top 10 for save percentage and goals against average, with Perets topping the save percentage list at .948. Perets will likely get the start but both goaltenders are excellent options in the weekend tournament.

QU also hosts a slew of excellent two-way defensemen who have helped the Bobcats allow the fewest shots on goal in the nation. Zach Metsa leads the team in scoring and is the second leading defenseman scorer behind only Michigan’s Owen Power. Griffin Mendel and Jayden Lee also offer a powerful defensive presence and can contribute on the passing game. The blue line also has the Bobcats’ penalty kill at 91%, tied for third-best in the nation with Michigan Tech and only trailing Northeastern and Notre Dame.

The forwards are no slouch either. Wyatt Bongiovanni’s 12 goals lead the ECAC’s top-scoring team and the nation’s 9th best scoring outfit.

These teams met twice last season and Quinnipiac won both games, 9-2 and 2-1(OT). Sacred Heart’s only got three wins against Quinnipiac all time, but the most recent was the inaugural CT Ice Tournament.

Quinnipiac is a favorite to reach the Frozen Four and boasts talent in all phases of the game. Sacred Heart is comfortable in their own building, and will give the Bobcats a fight. But Quinnipiac is the favorite and deservedly so.

UConn’s likely got better talent than what their near .500 record would indicate, but the Bobcats have a deeper offense and better defense. The Bobcats are the favorites to win this weekend’s trophy.