The PPL Center opened for use in September of 2014, and is hosting its third NCAA Hockey Tournament regional this season. It’s quickly become a staple venue in recent years and promises to be a regular spot for the immediate future. Four teams travel from four different states to take a shot at a spot in the Frozen Four in Boston. Let’s take a look at the matchups.

If ever the David vs Goliath sports cliche were real, it’s this matchup. Michigan is both the most successful college hockey program in the sport’s history and most talented unit in the 2021-22 season. Meanwhile American International College is in their third straight NCAA Tournament with almost no hype, professional attention, and a fraction of Michigan’s budget.

Brendan Brisson and the rest of the Wolverines have been waiting for this weekend for a long time. It's almost here.#GoBlue〽️ pic.twitter.com/lpAzLMcuDu

The offense is third in the country for goals per game (3.9), sixth in power play percentage (25.5%), and tied for fourth in shooting percentage (11.7%). This team can also play some defense. Mel Pearson’s squad is tied for 7th in goals against and Erik Portillo is tied for 8th in the nation for save percentage (.928) while making the fourth most total saves of any goalie in the country and the most of any goalie in the NCAA Tournament.

Portillo, a Sabres draft pick from the 2019 third round, will need to be at his best in Allentown, as his Wolverines are about middle of the national pack for most shots allowed per game (28.9) and in penalty kill percentage (82.9%).

Their opponent, the American International College Yellow Jackets are the complete opposite of the Wolverines. There’s only one draft pick for AIC: Jake Kucharski, who is unavailable to take the net for the regional. AIC does present some offensive ability, ranked 5th in the nation on the power play (25.7%) and tied for 7th in goals per game (3.5). 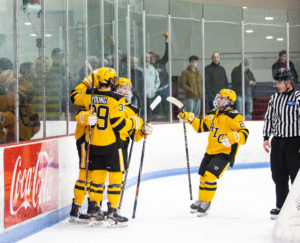 AIC celebrates a goal against Bentley in the Playoffs. Credit-Kelly Shea, AIC Athletics

The concern is the defensive end, particularly in net. Kucharski is unavailable, but Alec Calvaruso (15GP, 10-4-0, 2.38GAA, .911SV%) slotted in and took the starting job for the playoffs. He shut out Air Force in the Conference Championship game and posted an early season 45 save effort in an overtime loss against Quinnipiac. The Livonia, MI, native can perform beautifully, but needs to up his game a step higher. Particularly with AIC’s best defensive defenseman and captain, Parker Revering (25GP, 2G/6A/8PTS) out due to injury. Brett Callahan (24GP, 2G/6A/8PTS) returned to the lineup in the conference tournament after a month’s absence and posted two assists in the semi-final against Mercyhurst. He’ll have to help slow down the most potent lineup in college hockey’s recent memory.

AIC is only 15th in goals allowed per game (2.4) and faces likely the most potent and dangerous unit they’ve ever faced. The Jackets have much more experience in the NCAA Tournament than Michigan does. The Wolverines have just one player who’s seen tournament ice before while the vast majority of the Yellow Jackets played in last year’s tournament, and several played in the 2019 Tournament in which the Yellow Jackets upset the top ranked and seeded St. Cloud State Huskies.

The perception is that Michigan should outclass the Yellow Jackets, but Mel Pearson is not operating in that headspace. “They’ve won a lot of hockey games,. They’re an excellent coached team. Eric Lang and his staff do a tremendous job. One of the best coaches in college hockey that doesn’t get the recognition. It doesn’t matter what league you play when you win as consistently as they do. There’s a reason why. You’ve got good coaches and you’ve got good players.”

Coach Lang is similarly respectful of the Michigan unit. “We’ll have to take care of the puck and we’re going to have to have unreal back pressure and reload, and we need great angles and great sticks and things that, whether we’re playing the University of Michigan or playing Mercyhurst, we’re going to have to be good at those things. We’re not going to be able to put seven NHL first round draft picks out there tomorrow night, so our team game is certainly going to have to be better than their individual game.”

Quinnipiac is defined by outstanding defensive performance. Between Richter Award candidate Yaniv Perets and graduate transfer Dylan St. Cyr, the Bobcats shattered the previous team record for shutouts (Niagara, 2000-12) with 16 goose eggs across the season. Perets, a freshman from Dollard-Des-Ormeaux, Quebec, is working on a historic season. He boasts the best Goals-Against-Average in the country (0.96) and the second best save percentage (.948). If the season were over today, his GAA would be the new record for a single season, surpassing Jimmy Howard’s 2003-04 numbers of 1.19, while playing almost 400 more minutes than Howard did as a Maine Black Bear that season. He’s also one shutout short of tying the all-time record, belonging to Niagara’s Greg Gardner, with 12 in 1999-2000. The lone concern for Perets is his relatively low workload (18.6 shots per-game) and a poor ECAC Championship Game against Harvard. The Crimson recorded a mere 17 shots on net, but three of them found twine. Perets will need to perform well for the Bobcats to win. But should St. Cyr need to see the net, his five shutouts and .939 save percentage indicates no drop in goalie talent.

Speaking of scoring, QU’s forwards have the Bobcats tied for 10th in goal scoring (3.3GPG) and tied for 7th in total goals (130). Graduate transfer Oliver Chau (UMass, 39 GP, 13G/20A/33PTS) leads the way and provides some desperately needed successful postseason experience with his National Championship ring with the Minutemen last season. Seniors Wyatt Bongiovanni (40GP, 15G/18A/33PTS), Ethan de Jong (40GP, 10G/18A/28PTS), contribute to a balanced offensive unit with few letups throughout the lineup. They pounded Harvard with 49 shots and were only denied the ECAC Title by a 47 save effort by Mitchell Gibson. Quinnipiac is a fully-loaded unit looking to put a disappointing slew of postseasons behind them.

Everything you need to know to watch the #Huskies tomorrow! 👇#GoHuskies | #HuskyHockey 🏒 pic.twitter.com/mrLxsBGm28

As a unit, St. Cloud posted 3.6 goals per game, tied for fifth in the country, on the nation’s best power play (31.3%). The concern for the Huskies is their defensive end. They allowed 2.6 goals per-game, tied for 22nd in the nation and the worst GAA of any team in the national tournament. David Hrenak (31GP, 2.26GAA/.914SV%/16-11-4) protected the net for the majority of the season but fell ill before hosting Minnesota-Duluth for the NCHC playoffs. He’s with the team and practicing, trying to get back up to speed, but Head Coach Brett Larson did not indicate if Hrenak was quite ready to play. If the fifth year senior from Povazska Bystrica, Slovakia, is deemed not ready to play, then Jaxon Castor (8GP, 2.52GAA, .906SV%) would take the net. The Phoenix, AZ, native posted 33 and 37 efforts in 5-2 and 4-3 overtime losses against Duluth in the NCHC playoffs.

St. Cloud’s offense is potent and has to matchup with the best defensive team in the country. The Huskies will have to find a match for the Bobcat defense to avoid falling to 0-2 against QU in NCAA Tournament play all-time (the first loss was in the 2013 Frozen Four in Pittsburgh).