Northeastern (15-8-2) has a chance to claim their third consecutive Beanpot championship and join BU and BC in the three-peat club. This is the 3rd time consecutively they’ve played in the Beanpot title game and 20th time in the Beanpot Title game. Huntington Avenue’s huskies enter off a win over Harvard on Monday followed up with a Hockey East let down to Maine in Orono. They boast the nation’s 12th scoring offense (3.24 GF/GP). Tyler Madden (17-18-35) is the most sensational skater on the team and has plenty of big game experience. He famously scored the overtime winner in last year’s opening round matchup between these teams. Aidan McDonough (9-12-21) joins fellow draft prospect Madden on the top line and has grown into his top line winger role. Behind the big guns, Jim Madigan can roll a plethora of experienced forwards. Zach Solow (12-15-27), Matt Filipe (6-13-19), Grant Jozefek (6-9-15), and John Picking (5-6-11) are all seniors with multiple Beanpots, NCAA Tournament trips, and the most recent Hockey East championship under their belt. 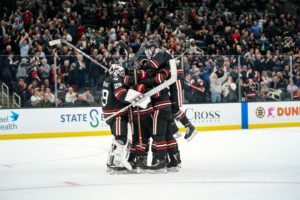 Ryan Shea (4-21-25) headlines the NU blue line. The Husky captain is strong and smart enough to defend his end of the ice while savvy enough to distribute pucks for offensive pace and rhythm. Jordan Harris (3-14-17), Jayden Struble (3-7-10), Jeremie Bucheler (1-2-3), and Mike Kesselring (1-2-3) are also smart and stout players on the blue line.

The biggest revelation for the Huskies is among the least expected pieces. Craig Pantano (2.42 GAA, .915 SV%) filled the net left open by Cayden Primeau quite well. The Merrimack transfer student committed highway robbery in the third period of NU’s semi final game against Harvard and has earned the starting netminder job. He’ll be needed for a win against the Terriers.

Boston University (10-9-7) enters Monday off a roller coaster week that signifies their whole season so far. BU defeated BC for their Beanpot semi-final victory before dropping a bad game to Merrimack on Friday night. The biggest question coming off Friday night is how Ashton Abel (2.48 GAA, .911 SV%) will bounce back. The freshman from Fort McMurray, Alberta, stopped 35 Eagle shots in the semi-finals, but played easily his worst game since arriving in Boston against Merrimack, surrendering five goals on 28 shots faced. He’ll likely be the starter still, but he is a young player against an experienced team. He’ll need to round back into form for Monday night. It is possible to see Sam Tucker (2.79 GAA, .908 SV%) in this game, but Abel will almost certainly start.

Up front, the Terriers boast some terrifyingly skilled players. Their offensive attack is ranked 16th (3.19 GF/GP), only slightly behind Northeastern. Anaheim Ducks draft prospect Trevor Zegras (8-19-27) is a candidate for Hockey East’s and the Nation’s freshman player of the year. Robert Mastrosimone (7-9-16), Ethan Phillips (2-8-10), and rising folk hero Wilmer Skoog (2-2-4, 9 GP) have all matured as the season’s gone on. Skoog has a pair of overtime winners including the winner against BC. Patrick Curry (15-10-25), Patrick Harper (12-19-31), and Logan Cockerill (1-2-3, 10 GP) head up a veteran collection of forwards who’ve won a Hockey East championship and made NCAA Tournament appearances in 2017 and 2018. 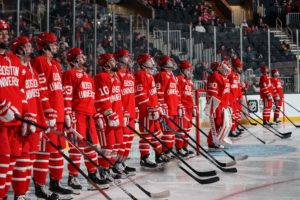 BU lines up for their first match of the Beanpot. Credit- Julia Monaco

Blue liner David Farrance (12-20-32) is the team’s leading scorer. The Nashville Predators draft pick is the nation’s second leading blue line scorer and leading defensive goal scorer. He will be the single biggest piece for Northeastern to slow down. Cam Crotty (2-5-7), Dominic Fensore (3-11-14), and Kasper Kotkansalo (0-5-5) add depth diverse skill sets to the blue line. Fensore can score, Crotty can distribute, and Kotkansalo can hit and defend.

This is BU’s 54th trip to the Championship game. They’ve won 30 previous editions of the tournament but haven’t won a Beanpot since Matt Grzelyck’s overtime winner against Northeastern in 2015, the longest active Beanpot drought.

One factor is how the crowd will sway. Northeastern has turned TD Garden into a home building for the last two years and can be expected to do the same for the Beanpot Championship game on Monday night.

A win here can also build momentum for these teams moving forward. Both are in a perilously tight Hockey East playoff race and need a momentum push. A slightly hilarious note is that Northeastern is 12th in the national Pairwise rankings, good enough to secure an NCAA Tournament spot. They sit in 9th in the Hockey East standings, meaning if the regular season ended today, they’d miss the Hockey East tournament completely but make the NCAA Tournament.

PREDICTION: Northeastern 4-3. BU is talented yet inconsistent. They normally get up to give Northeastern a fight. I expect nothing less than a war from this matchup. But this tournament is Northeastern’s to lose. They’ve got the experience, the crowd, and the historical push to win it.

END_OF_DOCUMENT_TOKEN_TO_BE_REPLACED

UND Hockey: What Happened to Them?

Thirteen games into the 2022-23 season, the University of North Dakota men’s hockey team isn’t meeting expectations. After winning a third National Collegiate Hockey Conference regular season title in a row, the Fighting Hawks have fallen on hard times. Through 13...