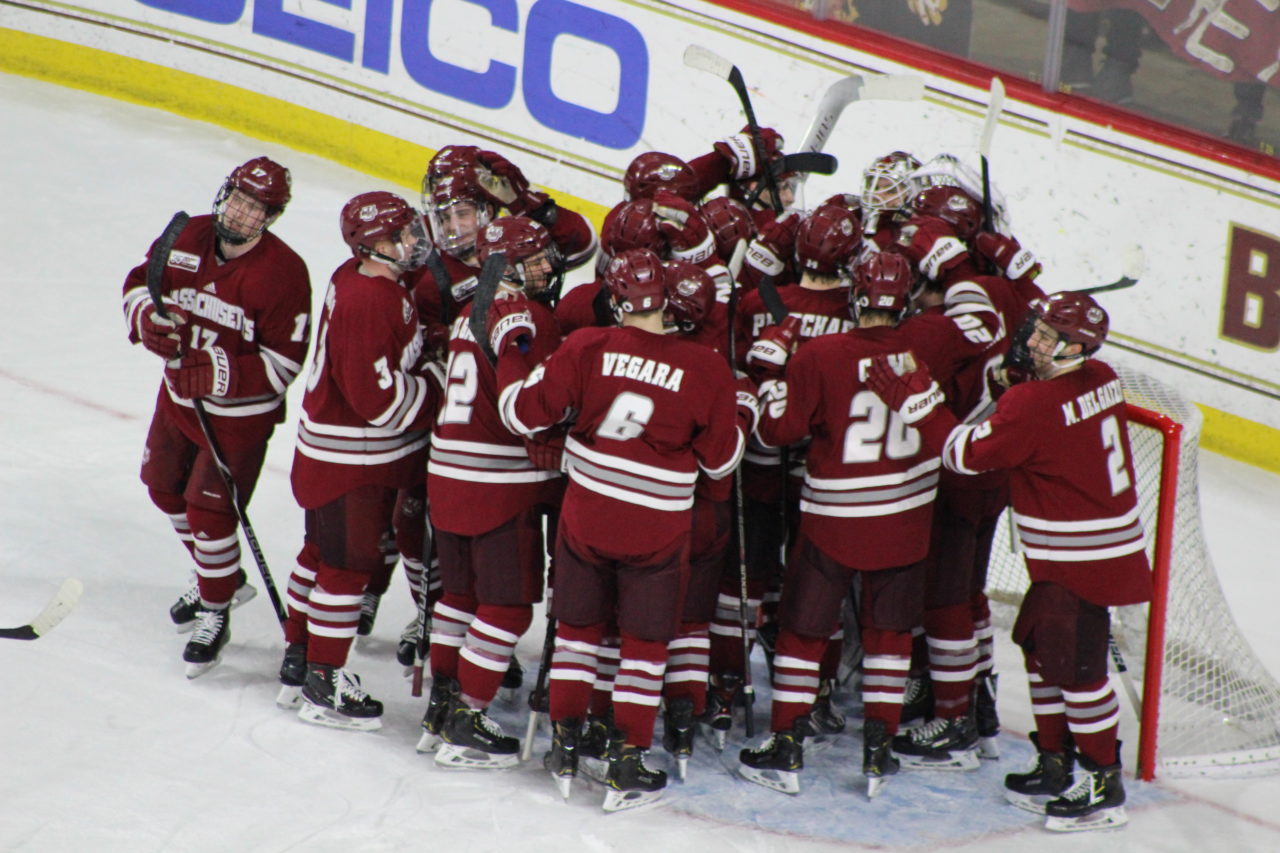 The Hockey East playoffs begin a week later than past years thanks to a changed format. Nonetheless, the postseason road to TD Garden begins in haste with eight teams jostling for a chance at the Lou Lamoriello Trophy. Let’s take a look at the matchups for the upcoming round of series.

This series has potentially the most compelling storylines. Massachusetts is in the midst of a magical and memorable season. Cale Makar is the front-runner for the Hobey Baker Award. Greg Carvel is a leading candidate for the Penrose Award. The Minutemen won their first Hockey East Regular Season championship behind the nation’s third-best offense and sixth best defensive goals against average. Mario Ferraro, Ty Farmer, and Marc Del Gaizo join Makar on the blue line for a formidable unit. Jacob Pritchard, John Leonard, and Mitchell Chaffee are major cogs in the forward lines that have tortured defenses all season. Matt Murray and Filip Lindberg have both had decorated years. Murray won his first ten games and Lindberg helped his home nation, Finland, to a World Junior crown. Both are quality options.

New Hampshire, meanwhile, transitioned from Dick Umile at the helm to Mike Souza seamlessly. The Wildcats slumped out of the gates, but played 13 overtime games and drew out nine ties, both the most in the nation. They played more close games than anyone in the country and missed a few wins thanks to dumb luck. Max Gildon and Benton Maass lead the Wildcats from the blue line. Liam Blackburn had a 15-game point streak to lead the Wildcats in scoring. Angus Crookshank and Ara Nazarian provide good offensive depth. Mike Robinson got the majority of the starts in net and promises to be the starter for the Wildcats this weekend.

Jason Scales- UMass in 2 Too much for talent for UNH to handle. A successful season for first-year head coach Mike Souza. A lot to build on in Durham. For the Minutemen the time is now. While Coach Carvel has built something spectacular in Amherst, it’s the Cale Makar show’s final showing.

At season’s outset, both these teams were expected to finish at the top of Hockey East’s standings. Providence held up their end of the bargain with their expected level of physicality and increased offensive output. Kasper Bjorqkvist, Josh Wilkins, and Brandon Duhaime have performed as advertised offensively. Young players like Jay O’Brien, Jack Dugan, and Tyce Thompson have helped the Friars to a top-20 offense. Jacob Bryson, Vincent Desharnais, and Spenser Young patrol a strong blue line and Hayden Hawkey backs up the nation’s fifth-best defense in net while sporting the best name in the country.

Boston College did not perform to standards. The Eagles offered tantalizing offensive talents in Logan Hutsko, David Cotton, and Oliver Wahlstrom. However, the offense in the heights was limited to Cotton’s Hockey East-leading 20 goals. Everyone else underperformed dramatically, leading to Hockey East’s third-worst offense. Casey Fitzgerald, Michael Kim, and Ben Finkelstein have been good pieces of a strong blue line and Joseph Woll is a show-stealing goaltender. BC won the first of two matchups with PC, but the Friars got the regular season finale.

J.S.- PC in 3 The Friars will outlast the Eagles but not by much. It will be a squeaker. This should be the best series in HEA quarters. The big question is will BC show up. Another underperforming season for the Chestnut Hill gang. Providence has something to prove as the NCAA tournament approaches.

Northeastern and Maine have reversed their historical roles for the last few seasons. Maine has been treading water behind a game-stealing goaltender in Jeremy Swayman. Chase Pearson and Mitchell Fossier form a dangerous top unit at the top of the Black Bear offense. Sadly, the depth of the Maine offense is lacking. Brady Keeper and Rob Michel can make plays happen from the blue line and will have their hands full with the Huskies.

Northeastern has been adding to their trophy case with a second straight Beanpot and notable wins against St. Cloud and UMass. Tyler Madden has restocked the offense left by last year’s top line departing to the pros and helped Zach Solow, Liam Pecararo, and Brandon Hawkins to another strong offensive performance. Jeremy Davies is the offensive force of nature from the blue line and a Hobey Baker candidate. Cayden Primeau maintains a strong performance in net and is a threat to steal any game.

J.S.- NU in 2 Maine won’t do much away from Orono. At least they have one of the sweetest road uniforms to get swept in. Northeastern’s talented core looks to ride the Beanpot bump to more hardware.

Lowell rode a ten game point streak in January and February to a high spot in the pairwise and an almost guaranteed NCAA Tournament spot. They then scuffled late in the year and slipped to the wrong side of the Tournament bubble. Tyler Wall and Christoffer Hernberg are an excellent tandem in net with Wall returning to form after a terrible sophomore season. Matthias Goranson and Chase Blackmun provide a strong presence on the blue line while Ryan Lohin, Conor Sodergren, and Ryan Dmowski have performed well while rolling 12 freshmen into the lineup.

Boston University, meanwhile, rode a roller coaster of a season. Albie O’Connell’s first season at the helm of the Terriers saw Jake Oettinger perform beautifully well in net for big stretches of the season and scuffle at others. Joel Farabee and Patrick Curry remain dangerous forwards and helped BU to a strong January before a poor performance in the Beanpot. Dante Fabbro and David Farrance anchor a mobile blue line that can score a fair share of points and can perform well on big stages. They won the Hockey East Tournament last season. Still, this unit has been too inconsistent to predict a victory for the series.

J.S.- UML in 3 BU has too much talent to get swept, they should win at least one. The Terriers truly are a head-scratcher. All that talent and nothing to show for it. Was Albie O’Connell the best man for the job?

C.L.- Answer to the Albie question: Time will tell long term. But I believe he is. The program changed with David Quinn’s departure and whoever took the job had big shoes to fill. Quinn struggled his first year as well. The program needs to become Albie’s.